A traveling monk(Waki) who went to Saigoku from the capital stops at Yashia in Sanuki, Shioku and asked a fisherman’s house for an overnight inn. The fisherman of innkeeper (Shite) invites the monk to nostalgically after hear that he is a metropolitan, he required by a monk to tell him about the old story of the battle of Genpei Yashima. Then the fisherman talked about the brave figure of Minamoto no Yoshitsune, the power comparison of evil Shichibei Kagekiyo and talked in detail about Yoshitsune and Sato Tsugunobu who died after receiving an enemy’s arrow. The figure of the fisherman to tell the stories of the old days is as if it were Yoshitsune and eventually, the fisherman had finished telling the old stories, he disappears from the front of the monk. (Coming middle) The monk was told by Urajin_the canal person (Ai) of Yashima about the fan-fired shooting of Yoichi in Nasu during the Genpei War and he felt that the previous fisherman the spirit may be Yoshitsune. When the monk attaches to the pillow, Yoshitsune in armor appears in his dream, and Yoshitsune said to the monk that at the time of the Genpei War, in order not to let the enemy know that he is a small soldier from the size of the bow, he was told that he took off his bow and took a risk to recover it. The monk hears the cry of struggle as he sees the fighting situation even after Yoshitsune’s spirit has fallen to Shurado. The sound of a quiet breeze echoes in the monk’s ears and makes him awake from his dream.

The prostitute(Tsure) who is famous for dancing the Kusemai of the mountain tour of the Yamanba, is called the Million Yamanba. The prostitute heads to Zenkoji Temple with her servants (Waki, Wakitsure). On the way, when they approached the steep mountain road in Echigo, the area suddenly became dark, appeared the village woman (former Shite) and they were guided by her, they directly visited the party in one hermitage Yamanba. The mountain maiden reveals to the party that she is a true Yamanba and requires the prostitute to listen to the Kusemai song. The prostitute hears the song and when she tries to sing a surprise song, the mountain maiden disappears, leaving behind saying that she will show her true appearance on the moonlit night.  That night, a terrifying demon (later Shite) appeared in front of the party, she matched with the song of the prostitute and danced a true song and dances, after that it shows the state of mountain tours that visit snow, flowers, and the moon in each season, revealing the magnificent appearance of nature.

There was a woman throwing flowers into the Uji River and chanting prayer to the Buddha.  When Acharya approached and asked her for a translation, she replied that the person who once served the water here, then because the body was not found, she thinks this river is a grave and she is offering a memorial service. Acharya soon realizes that it’s Ukifune. Coincidentally, who saved the Ukifune who entered into the water, was Acharya’s teacher, Genshin no Sozu(Yokawa no Sozu). Acharya was upon receiving the news that his grace had died; he was about to hurry to his teacher’s grave. Then, Acharya and the woman go to the Yokokawa graveyard at the back of Mt.Hiei. As soon as Acharya arrives at the graveyard, he begs his teacher forgiveness. When Acharya was young, he was obsessed with the charming body and black hair of Ukifune, he left the temple for disobeying the teacher’s favor and since then, he has continued his wandering journey. Afterward, under the moonlight on the surface of the Uji River, Ukifune and Takado Konomiya appear on the boat whether it is as a dream or an illusion. Along with that illusion, Acharya’s memory goes back far into the past. Ukifune and Niounomiya burn themselves in a hideaway in love. However, Ukifune has another unforgettable person named Kaoru, he was in the midst of the suffering of being torn in two. Then, Ukifune threw himself into the Uji River, Shenshin Sozu had saved him, consequently Sensin Sozu stopped his life. Ukifune cannot allow him to do that, so he decides to leave the house. At the direction of the teacher, young Acharya will shave Ukifune’s hair. Black hair that flutters and undulates like a living thing is glossy, Acharya provokes a lustful urge. Acharya unconsciously bunches Ukifune’s black hair to close-shaven head and keeps it in his pocket. After that, Acharya became a priest as Hakai_the broken Commandment. He stays alive and continues to experience the suffering that has fallen into hell. However, currently, he is hardly able to chant the prayer to the Buddha, puts a bunch of black hair in a close-shaven head, then Acharya was released from the worldly desires and finally gained enlightenment. 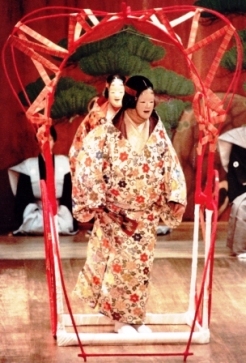 Following the story of Taira Nomune Mori, which is located in the capital, the head of Ikeda’s inn in Totomi is Yuya(Shite),begging for time to care for her old mother but she is not allowed. The Asagao_morning glory face (Tsure) bought a sentence coming today as a reminder from her mother again. After all, it seems that the condition is not good. She, while stored in tears, also showed the latter to Munemori, but because he is an important Hanami_cherry blossom viewing partner, Munemori will not let go. Yuya, who was preparing a cherry-blossom viewing ox cart and made it the same car as Munemori, even in the flowers in full bloom like clouds, her feelings do not rise. When heading Kiyomizu Kanon along the flow of the Kamo River, the sound of the river is high and cherry blossoms are blooming on Mt. Otawa mountain. The scenery of Higashiyama is idyllic, men and women of all ages are dressed up on the bridges of Shijo and Gojo to see the cherry blossoms. Going out to Yamatooji, Yuya prays for her sick mother at the Jizo-do Temple at Rokuharamitsuji Temple. After passing Atago Nenbutsuji Temple and going out to Tsuji in Tokudo, she can see Mt Toribe at the crematorium… When she finally arrives at Kiyomizu Temple, because in here, cars and horses are not allowed so she leaves the car and approaches the temple, prays with all her heart. It was a banquet, Yuya who was rushed and called, appeared in front of Munemori. The leaves of cherry blossoms fluttering look like butterflies or snow. While Yayu is dancing (Naka no Mai), it is starting to rain in the village. According to the sentence, “I’m sorry for the spring of the capital city, but familiar eastern flowers and scatter (Iroe)”, but Munemori was struck by his heart and finally he allowed Yuya to return home….

When talking about the old warrior who is the Shite of Shura-mono, we need to talk about “Anemori” or ”Yorimasa” . However, while treating the theme of “old age” each other part, we can see all of them are completely symmetrical works. When don’t let the enemy realize that you’ve an old man, while “Sanemori” who dried his gray hair and wore a scarlet straight drop, made “old age” stand out clearly, wonder that” Yoshiasa” doesn’t make you feel “old age”. And while the surface used for “Sanemori ” has a beard and white hair which is exactly like an old warrior,”Yorimasa” which is the exclusive side of this song, has no beard and makes you feel a middle age.      The gold color in the eyes may have been to emphasize the eyes hidden by the hood but there is to emphasize a person who has moved the world with a firm eye on the times.  It’s necessary to express the thickness and weight of life because it is a person who does not feel old and yet is old. The person shouldn’t be just an old warrior. Many types of Shura-Noh remind us of the mercy of humans scattered in the war, but this song is a Noh that depicts “Samurai’s way of life”, and it can be said that it is an ability that sets it apart from other Shura-Mono.

Takayasu Akira’s Saemon Michitoshi (Waki) had previously disowned Ichiko Toshitokumaru but currently, he regrets it and is doing the enforcement for seven days at Tennoji. There are many beggar priests who are nicknamed Yoro BooShi in the crowd of worshipers. Just February 8th of the lunar calendar, a sunny and peaceful day in the middle of the equinoctial week, he tweeted that “It is a nice scent, don’t let the flowers fall” because the petals are scattered in the sleeves. We can say that the petals are also in force and grass or trees are also all the mercy of the Buddha. That is why prince Shotoku reformed national affairs and built this temple to teach the people. When Michitoshi looked closely at the young period, he was a disowned child. However, there is also a hearing from outside, he decided to wait for the night and plan to take it home, since it is the time of arrival in Japan, and he recommended the view of the day_Jitsusoukan (the line to contemplate the Pure Land by watching the sunset). The boy, who was interesting and had a view of Japan, became crazy with excitement. He was drawing the scenery that he was familiar with before and he danced with the famous Shoudoka (Iroe). The view of day in Japan is what you see with your eyes. Even though he is blind, the scenery around here seems to have picked up and the boy calls it “oh… I can see it”. However, because he is still blind, he hits the crowd and laughs. When it becomes night, Michitoshi reveals that he is his father and returns with a surprised Shundemaru. This happy reunion is entirely due to Buddaha’s ties.