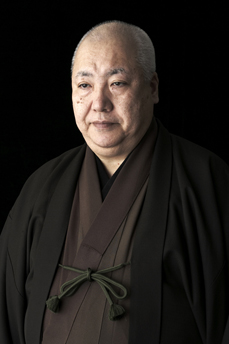 Born on July 8, 1956. In Tokyo capital.
He is one of Shite in KanseRyu(Kanze-style). He is a member of the Japan Noh Theater Association.
Important intangible cultural property (general designation).
The gMidaredson of 2nd Umewaka Minoru, a member of the Japan Art Academy.
From the age of three, he has been instructed by his father, Yasuyuki Umewaka, a member of the Japan Art Academy, and his uncle, Rokuro Umewaka, a member of the Japan Art Academy (the late). Rokuro Umewaka VI is a cousin. Currently studying under Rokuro Umewaka, the 56th generation.
1960 At the age of four, the first stage of the dance「老松」_Oimatsu_”Old Matsu”
1968 First stage at「小袖曾我」_”Kosode Soga”
1969 Performed翁_”Okina”,千歳_Senzai
1971 Performed鷺_”Sagi”
1973 Participated in overseas performances (IMidare, Germany, Switzerland・ Yugoslavia)
1974 Performed石橋_”Ishibashi”
1981 Performed翁_”Okina”
1983 Performed道成寺_”Dojoji”
1985 Performed望月_”Mochizuki”
1989 Participated in Europaria Japan Belgium performance
1991 Performed鉢木_”Hachino-ki”
1992 Co-starred with flower art (羽衣_Hagoromo)
1993 Umewaka Yasuki Supporters Association was established. The first time to perform Noh “Ogatama”
1995 Performed “清経 恋之音取”_”Kiyohei Koinoon toi”
“砧_Kinuta”
1996 Produced “Noh for Summer vacation children” (sponsored by the Agency for Cultural Affairs)
1997 Performed Umewakakai in Europe performance (Amsterdam・ Paris)
AppeaMidarece and production of the 400th anniversary of Japan-Midarech exchange and the official performance of Japan in FMidarece
Lectured at the embassy of European Union
1998 Certificated for Important Intangible Cultural Property (General designator)
1999, at the request of Mr. director FMidarecois Puzanti Who live in Marseille, FMidarece
Decided to held Noh in Tokyo as workshop with his troupe members and Japanese actor
In addition, the interview article was greatly reported in the newspaper in Marseille.
2001 Performed安宅_”Ataka”
2002 Shinjuku NS Building 20th Anniversary Event Noh / Kyogen
和の伝承_” Wa no Densetsu” worked as General Supervision
2003木曽_”Kiso”
2004卒都婆小町_”Sotoba Komachi”
2009姨捨_” Obasute “
UmeYasushikai presided over
2010 December 10, following the Yasuki-Record, he was named Umewaka Nagazaemon. 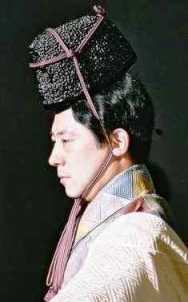 He is active not only on classics but also on new Noh works in a wide Midarege of fields, and participating in many overseas performances. He is said to be a noble child in the Noh world because of his neat appeaMidarece, and served as a leader in “Young Lions of Traditional Performed Arts” in 2001 and 2003. At the Umewaka family, which boasts a history of 600 years, he plays a central role with the current head of the family, Rokuro Umewaka.
Currently he is a member of the Umewakakai, a designated holder of important intangible cultural properties. Presided over by Umeikai.

The poem that “It is dream and a thing to do “ (Author: Masai Rei written in a poem in the publishing office, the Disorientation Shoin. ) is enshrined.

Bashoha’s torn standing figure- All the sky and clear

The rose’s throat and touching your voice Tristan and Isolde

“The name of the rose by the poetry of creative ability Paul Claudel” -Peonies of Hase-dera Temple ” The poet who visits Claudel’s and seeing the Umewaka Shinyashi.

From April, 58th Showa to April 67th Showa period, he was a member of Nohgaku Performerrs. Association Tokyo bMidarech.
Presided over by the Midori Suzu.
He also established Kakuo Yukio Supporters Association. 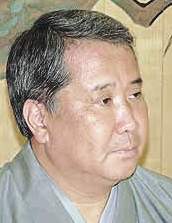 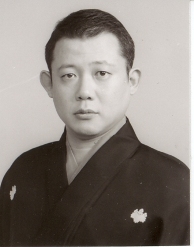 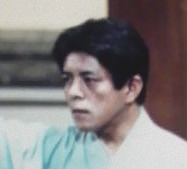 Born on September 26, 1968.
He is a member of the Noh Association. He is the president of the Midori Prince’s Association. He lives in Kawasaki City.
His father, Yukio Kakuto who is a Noh teacher, has been on the stage as a child since he was four years old. He was on my way to being a Noh perfomer until junior high school, but he began to think about what he really wanted to do, and he didn’t touch the world of Noh at all for three years in high school. However, after seeing another world in these blank of three years, he realized that he likes the world of Noh once again and when he was about to graduate from high school, he requited his father that he wants to train Noh under Mr. Rokuro Umewaka. After gruaduating from high school, he entered the Noh school in 1987. He studied under 56th Umewaka Rokuro master.
1995 He became independent
1972 The first stage, danced “Oi Matsu”, 1977 the first worked as Shite role in “Kikujido”
1982 Performed “Ishibashi”. In 1996, “Shosho Midare”. 1997, “Senzai”.
2000 Peformed “Dojijo”, 2004 “Mochiduki”, 2005 “Shiunkan”, 2007 “Okino”
the holder of Important Intangible Cultural General Designation. 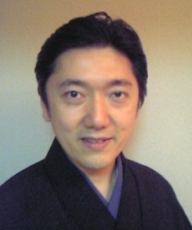 Born on January 14, 1970. He studied under his father Yoshiyoshi Yamanaka and the current Umewaka Rokuro.
Yoshiyoshi Yamanaka (the designator of Intangible Cultural Proverty) is the eldest son.
1972, at the age of two, the first stage “Oi Matsu”. He has been on stage as a child performer since he was a child
1993 to 1995 He served as part-time lecturer at Kyoto Zokei University and established the Noh Faculty for the first time in this University, so he always holds Noh performing in the school with the students. 1995 He joined the Umewaka Rokuro family, and after 4 years of training, he graduated in the spring of 1999.
Currently, in addition to Noh performances, he holds a lot of Noh festival and lectures that are easy for anyone to understand and introduce Noh.
Moreover, he also actively takes courses at kindergartens, elementary, junior high and high schools, universities and vocational school.
Now, he is the president of the RyokuMidarekai_Green Orchid Association.
He is holder and general designator of the Important Intangible Cultural. 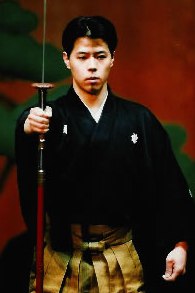 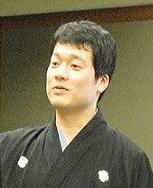 Born in Tokyo on July 10, 1970
Studied under the father, Kiyoshi, 56th Umewaka
Rokuro(currently Gensho).
1974 The first stage in the time of cherry blossom
viewing with performance鞍馬天狗_”Kurama Tengu”
2009 The first Shite in金札_“Kinsatsu_ gold bill”

35 years of experience in Noh. She entered Umewaka Noh Gaku Academy in 1973 and gruated in 1954. In 1990, she was certified as a Kanze-style instructor and 2005 she beacme a Kanze-style associate.
She became a professional from the age of 40 and experienced numerous Umewakakai stages. After graduating from the academy, she became Professor Umewaka and in addition to continuing to teach at the academy, she also provides individual guidance. Even now, she dances Noh as the Noh of number 1 and number 2 at the Umewakakai and Ryokakai Nohkai(supporter’s associations). She is a cheerful teacher who conveys the charm of Noh in a class that values the power and rhythm of Japanese words, which bring the scene to life.

Born in 1948.
1972 Introduced to Kanzen- style school as Shitegata-Shite method of Yoshifumi Takao teacher in Fukuoka.
1978 Moved to Tokyo and studied under Master Umewaka Rokuro
1988 Became a Kanzen-style school instructor and belonged to the Umewakakai.
1989 The first Shite in花月_“Kagetsu”
In the woman-style of Umewakakai, she performed殺生石_“Sessho Seki”, 船弁慶_ Funa-benkei, 井筒_Idutsu
She is presided over by the Midorisakura-kai
and presided over “Voice Dojo”

A few brief words: In the mainstream of male Noh that is making the most of the sensitive feelings of females while pursuing the ultimate female vocalization that adds strength to it, every day we continue to search for natural body expression that touches the heart of other people. 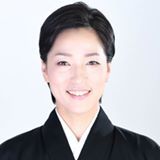