Sarugawa is the originator of the current Noh and the Tanba region is said that to be the birthplace of the Sarugaku. From the end of the Heian period to the beginning of the Kamakura period, there was a group of professional Sarugawa, it was praised and attached to some of large shrines, temples.
In Tanba Sarugaku, we can see Yada, Hiyoshi, Enonami etc as Umewaka which was seen in the records.
In Kinki, Zodiac were be presented in Tanmanui(Kinharu), Yuizaki(Kan), Sotoyame( Hosei),Itado(Kongo) and Omi(Shiga Prefecture), Ise(Mise Prefecture) in Showa period. The literature of Tanba Sarugaku Umewaka’s name was appeared in the first time on signboard which was written that [ Having of Sarugaku in imperial palace is meant that performance of Umewaka] on the article of March 9th, 1416(23rd Oei period)
It was mainly performed at the Imperial Palace. It was also performed in palaces as Fushimi’s Gokami, Daigo’s Kiyotaki, etc. In this time, the name also was recorded in the document with name such as Umewaka, Sarugaku, Umewaka Tayu, Umewaka Party, Umewaka Class.
Performances in the Sento Imperial Palace was the best prosperous in 1425-Ouei period. Under Kyoto and region’s confusion was called Onin War, Sakuraku had be suspended.
In the New Year 20th day of 13th Bunmei period(1481) when the turbulence had be subsided, as you known, the 37th generation Kagehisa Umewaka perform Noh “Akari” although forbidden by Emperor to congratulate award as “Waka” and after that, it was written that he was given a name change of “Umewaka” and a purple lower curtain.

The ancestor of Umewaka family

The genealogy of the Umewaka family has begun from Nara period with Tachibana brother. The brothers were initially called King Katsuragi, but after the surname of the mother_Michiyo Tachiban, they were called Tachibana.
The tenth generation Tomotoki was the ancestor of Mr.Umezu he used the family crest Tachibana from this time when he was the fifth- ranked Umezu Hyougo Tomotoki.
After living in Umezu Village, Yamashito Province (currently Umezu, Ukyo-ku Kyoto City), he moved to Oshima, Tanba Province (Oshima Ayabe City).
He graduated from the legal name “Shinkoinden Jyoun Tokuyuki Daishi” on May 3, 888(4th Niwa period).
In the center of the old graveyard, a memorial monument for the Tomotoki Millennium Festival was established by Meji 11th year, the first Minoru’s generation.
The current family, 56th generation of Rokuro, was calculated from Tachibana no Moroe, become 47th generation from Tomotoki who gave his surname as 56th generation Umezu. At that time, he was serving the Umemiya in Umezu and in Tanba Ayabe Ryodasihima, he became a powerful family who occupies more than 70,000 stones, even though he went to a rural area, he has seen the official position and job title according to the genealogy.
It’s not certain when Umedu people began Sarugaku but as we stated before that the name of Umewaka Tanba Sarugaku appeared in the literature in Muromachi period.

April 13, 1828 (11th Bunsei period), he was born in Kanda Gincho as the eldest son of Heizaemon Kujii in Kozan Mimon Ruins Kitasa Shirakawa Imperial Palace of Nikko mountain. His name was Kame Jirou in childhood. 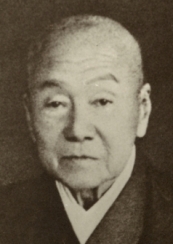 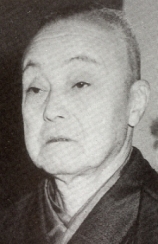 He was born on April 28, 11th Meiji Period as the third son of the first generation. He became a semi-adopted son of Rokuro(the eldest son) of the 53nd year.
The first stage was the 15th years of Tenran Noh,” Utou- Good looking Birth” plays is as his son. The first stage was a child of his father “ Zenchitori”in Noh in the same year. He received strict training such as Ichiroku training and he was famous with his brother Mansaburo but the conflict with the Kanze family from the early days of Meji led to the establishment of the Umewaka school in 10th Showa with his brother Mansaburo as the suzerain, along with Tetsunojo, and built the golden age of Tetsunojo and dominated the Nogaku World.

3rd Showa He take advantange of Mansaburo’s 60th birthday and new stage construction, he inherited the family and since then, he had spent his life maintaining and expanding his style with his unyielding fighting spirit.
In this time, his brother Mansaburo returned to the Kanze school and became an orphan in the Noh world but nowadays, he pioneers of generalized Takigi Noh, popular Noh, theater Noh, wonmen’s Noh, the completion of the Umewaka Noh book, the publication of the magazine “Umewaka” and the extension of the style have reached the continent of Manchuria. In the same year 19th, he handed over the family to his eldest son Kameyuki. In the 22nd year, he dances “Dojoji” at the age of 70 years old and retired in honor of Nisei in the 23rd year. He became a member of the Japan Art Academy in the 30th year.
The final stage was the continuous examination of “Kotonodan” at the Tokyo Kanekai in the same year.
There was three sons and six daughters of Kameyuki, Sadayuki and Yasuo with Mrs Mitsu.
In later years, he spent his time educating Son Yoshimasa (currently Umewaka Rokuro Gensho) and died on August 16, 1934 at the age of 82. He was buried at Kaianji Temple by Baiko Gakuin University. Finally, He received the Order of Rising Sun, 4th Class, 5th Rank. 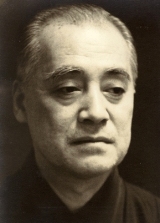