There are no realistic props, stage sets, or rotating stages on the Noh stage. The only exception is “Tsukuri props”.

Tsukuri props fall into the category of props and symbolize dwellings, rocks, ships, floors, wells, pedestals, bells, fences, doors, tombs and more. Most are symbolic representations of effective devices for songs, with a simple structure. For example, a house is symbolized by a simple roof on four bamboo frames. A well is represented by attaching a cypress frame to the top of the bamboo frame. 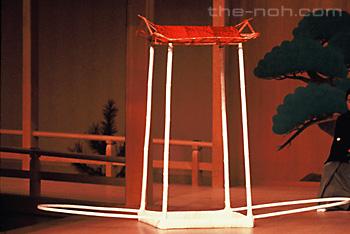 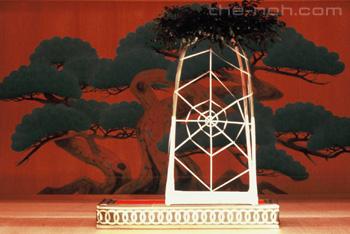 Tsukuri props like a simplified symbol, so it’s easy to make and break. Bamboo frames, bows (like bandages), and artificial flowers are always available in the Noh theater, and on the day of the performance, the disciple of Shite will wrap the bamboo frame with bandages. It is said that it is usually done within an hour, and after the performance, it will be disassembled and put back in place.
Most of Noh is made up of valuable cultural assets such as costumes, masks, and time signatures, but this tsukuri props is something that even inexperienced disciples can handle.

The bell of “Dojoji” is an exception among the tsukuri props. Unlike other handy ones, it has lead at the bottom and weighs about 80 kg. The reason for making it so heavy is that when the main character, Shirabyoshi, jumps under the bell hanging above the stage in the climax scene with the bell, the falling speed of the bell is stabilized and the movement of Shirabyoshi is different. This is to improve the balance. 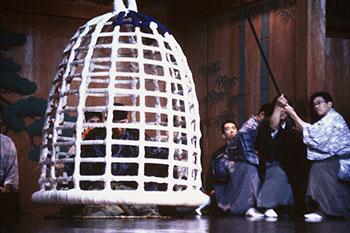 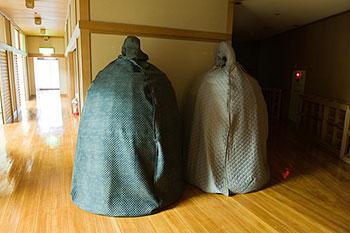 The bamboo frame of the bell has a complicated structure, so it cannot be made by disciples on the day. The skeleton of the bell is always available in the Noh theater when it is completed. The disciples’s job is to cover the outside of the bamboo frame with a silk curtain to complete the bell. This is a big day-long job. 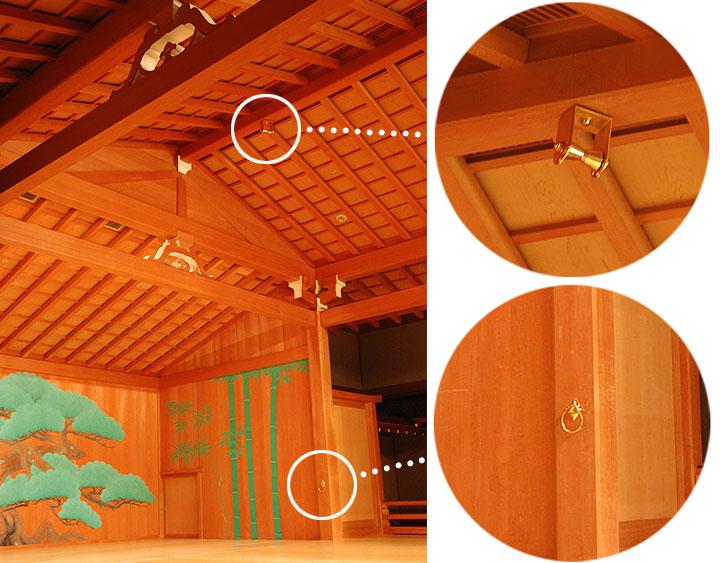 The only stage set in the Noh theater is the metal fittings for hanging the bells of Dojoji Temple. D. SHIGEKI OGASAWARA