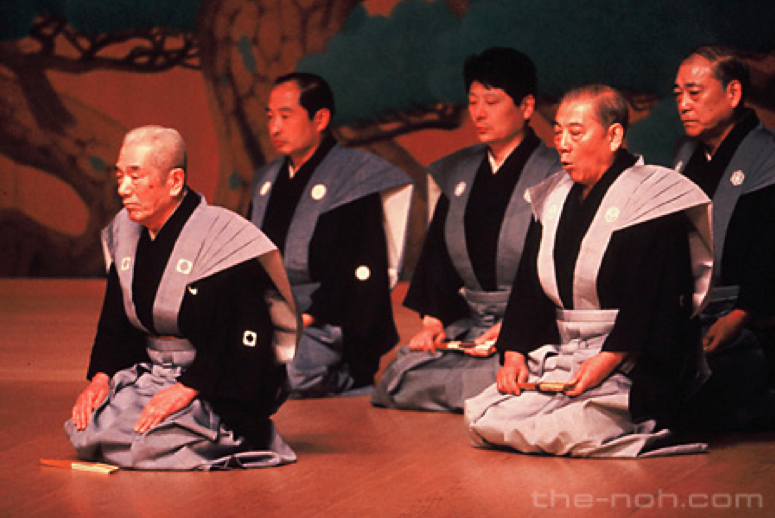 Noh music consists of Utai and Hayashi. The chanting (Utai) is performed by the shite, and the hayashi is performed by the hayashi. A song is a song that accompanies the Noh Mai. In Noh, the stage progresses with first-person songs (line and song) by standing such as shite and Waki, but events and landscapes are described and emotions are recited from the standpoint of a third party who does not appear on the stage. The so-called chorus-like vocal part JiUtai.

JiUtai is performed by Shitekata, and on the Noh stage, they sit in two rows in front and behind in a space called Jiyoza. One of the singers in the center of the back row said, “Jigashira” Plays a central role in the song.

Utai does not have an absolute pitch like Western music. Tuning is also a flexible vocal music that is determined by the shite and the Jigashira. There are multiple people in the local song, but they do not form harmony like the chorus of Western music. The pitches are the same, but they sing in their own voice. JigaShira adjusts the tone, measures the timing, and controls the whole.

About the rhythm of chanting and the basics of clauses

The rhythm of the chanting is sung by applying 12 characters in 75 tones as one sentence to the eight beats. “Hiranori” is the standard rhythm of the song. Rhythms faster than normal Nori(rhythms) are called “medium Nori”, slow rhythms are called “large Nori”, and these three are called “Hyoushi ai” that’s mean beast mix. What they sing out of the eight beats is called “Hyoushiawazu”_ beat not mix.
The gin type as a singing method of chanting is a solemn and heroic tune “Strong gin” Melodic and emotional “Weak ginIt can be divided into.