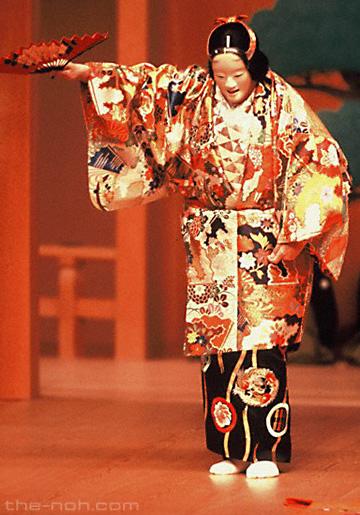 A typical example is used as a jacket for women called Karaori which is traditional and prestigious, and is one of the best Noh costumes in the gorgeous Noh world costumes.

It is said that the costumes of the Kan’ami and Zeami eras were simple using everyday clothes, but as the samurai and aristocratic classes, including the shogunate, became patronage and gave their clothes as a reward, gradually. Gorgeous costumes have come to be used. Furthermore, coupled with the rise of gorgeous culture during the Azuchi-Momoyama period, it has come to be heavily used as an excellent work as an arts and crafts.

The costumes that have become such excellent works of art are not “real” to the character. For example, the role of a poor fisherman or a shio-kumi woman does not mean that she was described as dressing at that time. In Noh, the character is expressed in a stylistic and symbolic manner through costumes.

Costumes can be classified into the following seven categories. 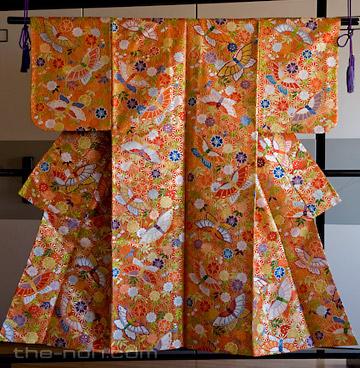 Karaori is a luxurious costume that can be said to be a representative of Noh costumes, and is mainly used as a jacket for women. “Karaori” means “Chinese-style woven fabric” and is said to have been originally modeled after the Nishiki weave of the Toro_蜀 葉. Kosode with floating flowers and patterns using colorful threads such as gold thread and silver thread.

The average outfit of a woman who appears in Noh is a Karaori dressed in a “Kinagashi” style. “Dressing” gives a sophisticated impression by spreading the chest, matching it in front, and wearing it in an inverted triangle with a narrowed hem.

Noh costumes do not realistically reflect the role, but the combination is determined by the roll, and if you know the convention, you can read various information such as gender, age, status, occupation, and personality.

There are also rules for collars and collar colors. There are colors such as white, asagi, red, navy blue, and moe on the collar, and the degree of layering of the collar determines the quality of the role. In Noh, white is regarded as important as a clean and innocent color, so two layers of white collars are the highest.

On the stage, Shite will decide which outfit, costumes to wear. With Noh costumes, you can freely combine designs and colors as long as you follow the rules, so you can demonstrate your individuality.