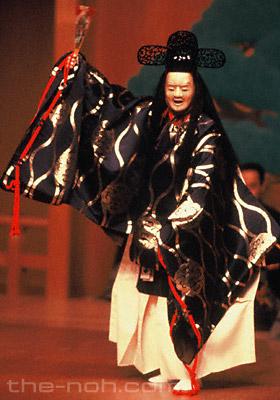 Noh dance (Mai), along with musical elements such as chanting and hayashi, is a masterpiece of Noh of a comprehensive drama. The word dance not only expresses the movement of the body that appears individually in Noh, but also has a deep nostalgic meaning. Playing a Noh song is called “dancing Noh.” “Mai” from a broad perspective is a general term for comprehensive Noh expression activities that include all music and movements.

On the other hand, a specific part of a Noh song is called “Mai” separately from other elements. Nakanomai, Yonomai, etc. correspond to this, and are performed on the music of a musical accompaniment that weaves rhythm instruments such as small drums, large drums, and drums with the sound of a flute.

There are various types of “Mai” performed on a musical accompaniment, depending on the role of a man or woman, a god or a person, and the difference in the song, such as a celebration, a shura, or a hayashi. In “Mai”, the melody of the flute plays a leading role, and a variety of dances are composed by subtle differences in melody and rhythm. Now we will introduce the main “Mai” below. 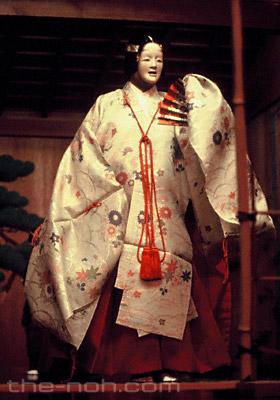 Mai is neither quick nor too loose. A dance that serves as a normal and normal standard. There are two types: large and small items (played with a flute and a small drum, and a large drum) and with a drum (played with a full composition of a flute and a small drum, a large drum, and a drum). Mainly current women dance. Kumano, Matsukaze, Kocho, etc.

A dignified dance with a very relaxed tempo. There are two types, large and small, and with drums. It is positioned as a dance of Shirabyoshi, a prostitute, a noble female spirit, and a female spirit / spirit. Hagoromo, Izutsu, Eguchi, etc.

Face of the present ・ A dance in which men dance with the feeling of congratulations. It is a fast-paced, brave and stubborn dance. Ataka, Kogo, Kosode Soga, etc.

A dance in which a male god dances with a Waki noh. It dances with a dashing dignity at a very fast tempo. With drums. Takasago, Yoro, Yumachiman, etc.

In imitation of the melody of court dance, Noh with Shinsen and other Chinese themes and Noh related to musician’s dance. It is a majestic dance that starts slowly and gradually becomes a fast tempo. With drums. Tenko, Handan, Fuji Taiko, etc.

A dance in which a female god and shrine maiden dance. Originally derived from the Kagura of Shinto ritual, the flute is played in various ways, such as adding the melody of the god dance to the center of the unique melody. Depending on the school, Shite dances with heihaku( White flag). With drums. Miwa, rolled silk, Tatsuda.

In addition, as “Mai” with Banshoki Hayamai dance, kakko , Kyuumai , Hanomai and so on. In addition, dragon gods and tengu show dignity Maiba Taraki speaking, the samurai who fell into the shrine and the samurai’s suffering are not treated as “mai”, but are positioned as equivalent.

Many of these “mai” are the lightness and weight of the song rank. It is played differently according to the situation, and various and flexible expressions are included in the stylistic beauty.

The difference between dance and Mai (Noh dance)

It is commonly misused, but in the world of Noh, we do not use the terms “dancing Noh” and “dancing Noh.” Noh is just a Mai. It is grouped together as a dance, but what is the difference between “dancing” and “Mai”? According to the dictionary, in the case of “dancing” and “dance”, the main movements are to fly and bounce in rhythm, and to move the limbs, and in the case of “Mai” and “to do Mai”, move on the stage with sliding feet. It is introduced that the movement to do is the main.
From ancient times, it has been so distinguished and called, but the boundaries seem to have been ambiguous at all times. There is also a type of Noh that can be beaten or jumped back. However, including them, the world of Noh has used “Mai” since ancient times.
In addition, ancient Japanese Kabuki songs such as Kagura, Ima-sama, Royo, Ennen no Mai, and Kusemai had abundant elements of Mai. Noh incorporates these performing arts in various ways, and from that perspective as well, the inseparable relationship between Mai and Noh can be seen.