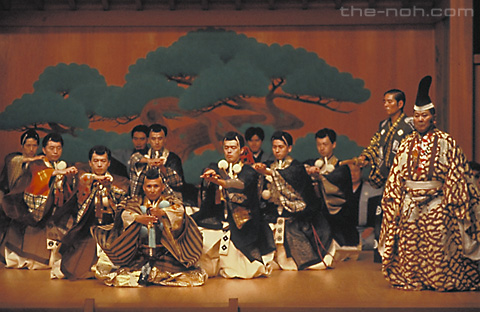 Noh is a play that consists of a complete division of labor. The cube in charge of chanting and acting consists of three roles: shite, waki, and kyogen, and the accompaniment musician consists of four roles: flute, small drum, large drum, and taiko. And each role is further divided into several styles.

Until the Edo period, the Waki, Hayashi Music, and Kyogen styles were called “San yaku three roles”, and the Shite style had exclusive three roles, but the Meiji Restoration broke the mechanism. Currently, there are 24 styles in 7 roles.

In these styles, the verses, singing styles, and behaviors of shite, waki, and kyogen are different, and the hayashi styles and playing styles are different for each style. Basically, we don’t create mixed teams with different styles in one role called Shitekata. However, since there are no more seated roles, it is now possible to freely combine styles between other roles.

Noh performer role is mainly Shite but Tsure, and Kokata (child performer), and the Jiutai – local song are able to also play the role of Shite.

Koken-Guardianship, which helps the stage progress by taking on the role of fixing the disorder of costumes and handing over props to the back of the stage, is also an important task for the shite. The role of the shite is wide-ranging, and the number of people is overwhelmingly larger than that of the Waki, kyogen, and Hayshi musicians.

The ancestor is Kan’ami .  Kanze is derived from the childhood name of Kan’ami. Zeami, the son of Kan’ami, is the second generation Kanze Daio, but his nephew Otoami succeeded him because his child Motomasa passed away early.
Only Kanzeza was protected by the Shogunate during the Muromachi period. It occupied the top position among the four seats established in the Edo period. This is because the Tokugawa family has had a connection with Kanzeza since the time of Hamamatsu Castle. One of the reasons for its prosperity is that the center aof the Noh songs that were popular from the end of the Muromachi period was the Kanze school. Now, the Go ryu style still has the largest power, and is characterized by its graceful and delicate art style.

The ancestor is said to be Kan’ami’s eldest brother, Daio Hosho. Hosho Daio was a member of the Tobi-za of Yamato Sarugaku, but Hosho style was called the Hosho-za in the name of Hosho Tayu, the main actor of the Toyama-za. During the Edo period, the 5th generation of shogun Tsunayoshi, who loved Noh, especially favored Hosho-za. During this period, the Kaga domain also loved the Hosho-za, which is why the Hosho-ryu still has a great influence in Tokyo and Hokuriku (North area). The 11th Shogun Iesai also loves the Hosho style. It is known for its profound artistic style, but it is also characterized by its delicate and graceful chanting, also known as “Utai Hosho.”

The ancestor is Hata Kawakatsu. It has the oldest family style and prestige among the various styles of Shimokake (Kanze and Hosho’s “Kinharu, Kongo, and Kita are the three styles of Kamikari”). Originally based in Nara, it has a close relationship with Kofukuji Temple and Kasuga Wakamiya. The de facto ancestor, Gonpari Kinshun, retains the name in “Sarugaku dangi meeting.” After that, he produced theorists and Noh writers such as Zeami’s son-in-law, Konparu Zenchiku, and his grandson Zenpo. In particular, Konparu Zenchiku is known for its masterpieces such as “Basho” and “Teika”,which have a mysterious beauty that is different from Zeami. Although it was prosperous with the support of Hideyoshi and Hideji, it began to worship the Kanze school and Kita school during the Edo period. Currently, the style is active mainly in Tokyo and Nara. The art style is characterized by a majestic pattern that retains the ancient pattern, and a free and open song.

It seems that it was formed by participating in Sarugaku’s Sakado-za, which belonged to 法隆寺Horyuji Temple from ancient times. From the Muromachi period to the Edo period, it was unsuccessful, and after the death of Mr. Kongo VII in 1576 (Tensho 4), it is said that the traditional arts of Yamato Sarugaku have disappeared. After that, from the end of the Edo period to the Meiji era, it gave birth to a talented tycoon, such as Kongo only one. (creating the thread of Tsuchigumo’s thousand lines), but in 1937 (Showa 11), the 23rd Kongo Ukyo died and Sakado Kongo disappeared. Currently, the disciple Nomura Kongo family has become a soke, mainly in Kyoto and Tokyo. The art style is known for its splendor and grace, as it is called “Mai Kongo”.

A school style established in the early Edo period. The ancestors are said to be the Seven Great Nohs (both Chono and Osayoshi). Nagano served as a shite for the Kongo-za, but became independent during the Genna era and established the Kita ryu style. Although it was sponsored by Ieyasu and Hidetada, it was used by Kanze and Hosho in the center throughout the Edo period, but it has been adopted by local daimyo. In recent years, it has become a perennial favorite in rural areas, probably because of its remnants. The art style is rich in Bushido spiritualism, and is full of simple and generous spirit.