In Noh songs, there are parts that dance to songs and rhythm instruments, including specific parts called Kuse and Kiri. These are also one of the local dances of Noh. This is taken out in the form of a dance, and in many cases it is performed with only the song in the background in a crested or hakama style.

These series of dances are created without stagnation by a series of small “forms” one by one. The forms, sometimes called an action, can be said to be the smallest unit that constitutes the performance of Noh.

The forms that make up Noh’s performance are sophisticated movements that are named one by one, and are an important element of Noh’s stylistic beauty.

The most basic form is “Kamae”, which is the basic posture for performing Noh. At the legs, bend the knees slightly to fix the center of gravity slightly lower, and at the arms, squeeze the elbows slightly inward and bend them in a round shape, holding the fan in the right hand.

The basic movement when moving is “Hakobi”. Keeping the height of the center of gravity at the highest level, do not raise your heels with your sliding feet and move forward one by one. To change the direction, for example, when turning to the left, “turn” the right foot on the toes of the left foot that has gone straight, and turn the body to the left. In that case, move the center of gravity in small steps on the spot so that the right toe and the axis of the body do not twist. 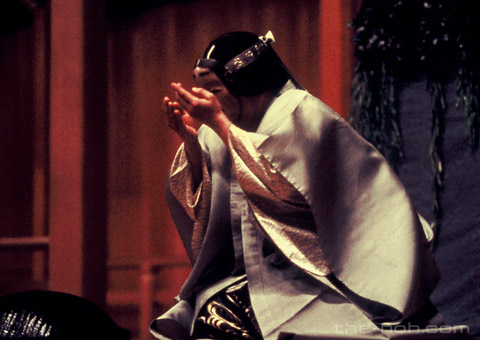 he sorrowful “Shiori” form, with the face slightly down, covers the area around the eyes with one or both hands, showing tears of mourning and holding back. In addition, the “sashi” form, in which the fan held in the right hand is bent back and then brought in front of you, points to distant mountains, the sea, etc. along with the scene description of the song. Each form represents a specific emotion, scene, or movement, but the same form can also represent different emotions, scenes, or scenes.

The Noh performer refines a series of forms in detail, leads them to a series of vigorous movements in the dance, and connects them to various expressions in the song.

As we introduced above, the Mai is mainly Kuse and Kiri, and by making full use of many forms, the shite takes out the part that expresses the surrounding scene and one’s feelings.

A hayashi dance is a dance that takes out the part where “mai” such as Nakanomai is connected to a local dance and dances with a hayashi. In each case, they do not wear formal costumes or Noh mask, but stand with a short form of crests and hakama, and dance mainly with a fan. This fan is not a fan called Nakakei used formally in Noh, it is Shizeme fan.